It started with a request for French Macarons.  I baked my trademark flavor, a cinnamon shell filled with honey buttercream. 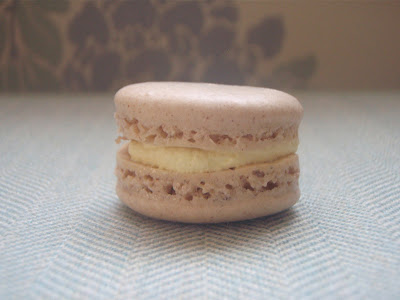 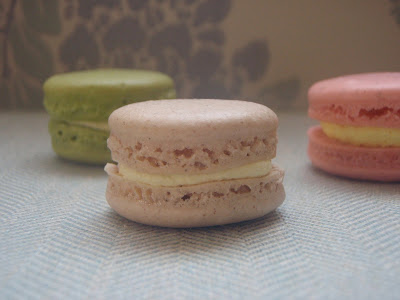 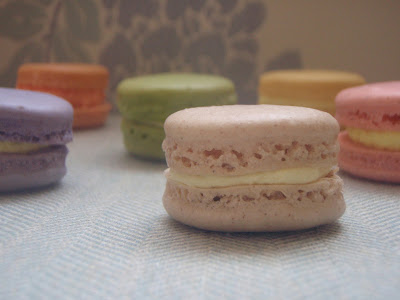 When you're celebrating the birthday of someone who puts the needs and desires of everyone else before her own, one flavor isn't enough.  Even six flavors isn't enough to say thank you for all you do each day, but at least it's a start.

And in case you're wondering who the birthday girl is, it's the artist who drew the beautiful logo for Le Petit Lapin.

It's my mom's birthday!

Bake the macarons a few days before you plan on serving them.  Fill the shells with buttercream and let rest in the fridge for about three days for the shells to soften.
For the macaron shells, I've listed and described the ingredients and process to bake vanilla shells.  To create different flavors, use either wet (extracts) or dry (ground spices) flavorings.  Add dry flavorings to the sifted almond-flour mixture and still add vanilla extract to the whipped egg whites.  Add the wet flavorings to the whipped egg whites instead of vanilla extract.
If you wish to color your macarons, gel food coloring works the best. Add the coloring to the egg whites while you're whipping them.  Remember that the flour mixture will dilute the color slightly.
For the buttercream, I listed the ingredients and described the process to prepare vanilla.  To alter the flavor with dry flavorings, still add the vanilla and stir in the flavoring at the end.  To use a wet flavoring, add the flavoring in place of the vanilla.  If desired, add food coloring when the vanilla is added.
I didn't list quantities for the buttercream flavorings.  I usually prepare one batch of buttercream and divide it into several portions for different flavors.  I add a very small amount of flavoring and taste  the buttercream.  I continue adding and tasting until the desired taste is achieved.  Be sure to only add a tiny amount of extract each time, as a little goes a long way. 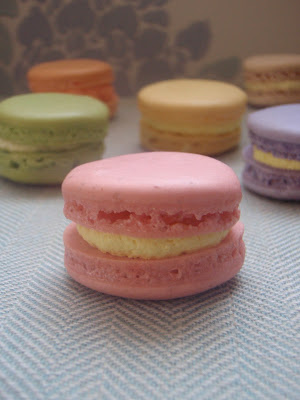 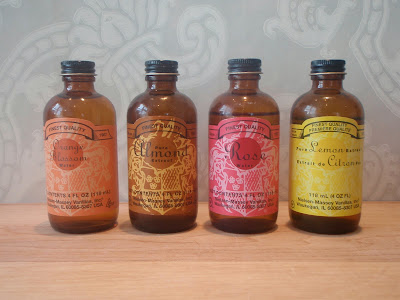 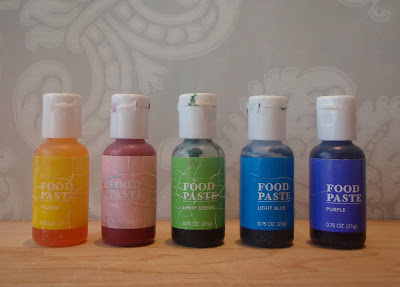 To bake the macaron shells:
1. Preheat the oven to 285 F and line a baking sheet with parchment paper.  Using a sharpie, draw 1 inch circles spaced roughly 1/2 inch apart on the parchment paper.  Turn the parchment over so the side with marker is facing down.
2. Sift the ground almonds and powdered sugar together twice.  Place the egg whites in the bowl of an electric mixer fitted with the whisk attachment and beat on high until foamy.  With the mixer still running, gradually add the 5 tablespoons of sugar.  Continue beating until stiff white peaks form.
3. Carefully fold in the vanilla.  Sift half the almond-sugar mixture onto the egg whites and fold in gently until all is absorbed.  Sift the remaining almond-sugar mixture onto the egg whites and stir carefully to combine.  Holding the mixing bowl at an angle, smear the batter against the side of the bowl using a large spatula.  Scoop the batter up and repeat 15 times.  This is called macaronnage.
4. Scoop the batter into a pastry bag fitted with a small tip (around 1 cm) and pipe macarons onto the baking sheet.  Rap the tray against the counter several times.  This adheres the macaroon batter to the sheet, helping create the pied on the macarons. Let sit at room temp until the batter is no longer sticky when pressed lightly with a finger.  This takes anywhere from 15-30 min.
They look like candy dots! 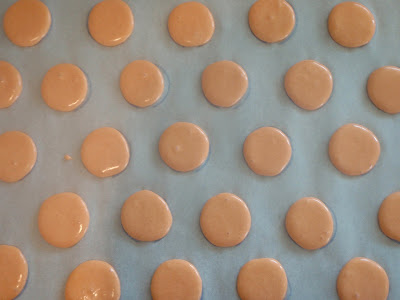 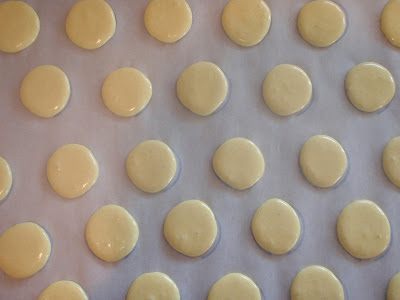 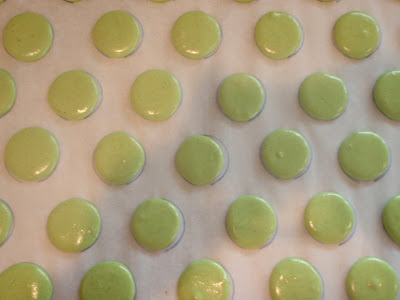 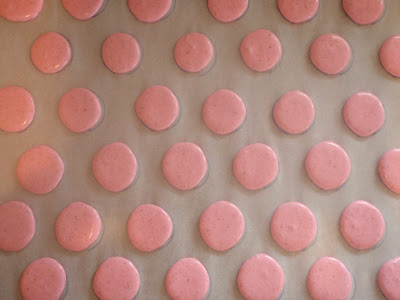 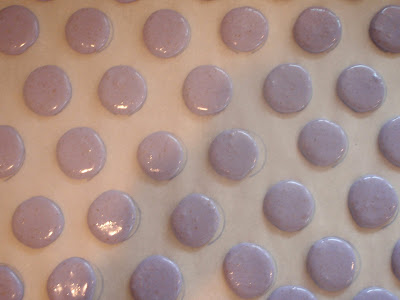 5.  When ready to bake, place a second baking tray underneath the one you're using and bake for 24-28 minutes, or until the macarons are dry on the bottom when lifted from the parchment.  Place the parchment on a cooling rack and remove the macaron shells when they're cool.
To make the buttercream:
1. Combine the egg whites and sugar in the bowl of an electric mixer and place on top of a pot of simmering water.  Stir frequently until the sugar is dissolved and the mixture no longer feels grainy when rubbed against the side of the bowl (160 F on a candy thermometer).
2. Remove from the simmering water and beat with the whisk attachment until stiff white peaks form.  Beat for an additional 6 minutes.
3. Switch to the paddle attachment and add the unsalted butter, a few tablespoons at a time.  Mix well after each addition.  Add the vanilla (and food coloring if using) and fold in gently.  If using other flavorings, add small amounts and taste until the desired flavor is reached.
To assemble the macarons:
1. Fit a pastry bag with a small tip and fill with buttercream.  Pipe a small amount of buttercream onto the flat side of a macaron shell and place another shell on top, flat side down.
2. The macarons should stored in the fridge for several days and warmed to room temp before serving. 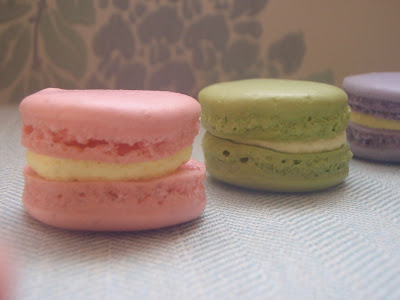 Here are the buttercream and macaron shell flavor combinations I created:

To pipe an optional message on the surface of your macarons, like Happy Birthday, use stiff royal icing to write your message! 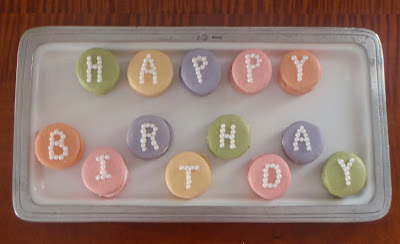 These macarons are just part of a birthday tea I'm preparing, so watch the blog for more to come!  This will include tea sandwiches, traditional scones and madeleines!
Posted by Le Petit Lapin at 1:50 PM 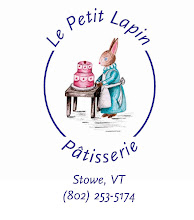